I decided to call her June to rhyme with my Chinese name (and also with Jon).

The search criteria was simpler this time: a “4-seat” track car that can be daily driven.  Hard top coupe was strongly preferred.  Furthermore, to take full advantage of living in the warm south, there is no need to contaminate the purity of the steering feel.  So RWD it is! With a set budget the search quickly boiled down to two models: 996.2 or 997.1.  I also briefly considered the E92 M3 but it was soon eliminated.

When Kenny visited us in South Carolina we test drove a 996 Tiptronic convertible.  While it was fun to drive, the Tiptronic still lacked urgency.  Hence the filter was further refined to manual transmission only (PDK was beyond my budget). Also I expanded my search to North Carolina and Georgia.

Cecilia had a great idea… When my in-laws were visiting, she had them spend a day with the kids at LegoLand Atlanta, so we can go “meet our clients”.  I had my list of cars to check out: a black 997S, a black 996 Turbo, and a silver 997.  The fist stop was a BIG disappointment, as the car was just sold!  However I stayed optimistic that I will find my perfect car later that day.  I immediately called the second car dealer to make sure that the 997 was still available (YES!) before we headed over there.

She is silver but the photos on Autotrader looked kinda “flat”.  I had a suspicion that the indoor lighting did not do the paint justice.  I was correct.  She was breathtaking even under a cloudy sky. 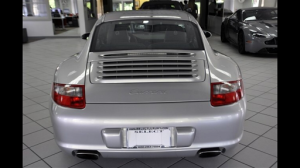 The test drive and the price negotiations went smoothly.  After a quick caucus with the other Team Shum members, I put down a deposit on condition that she will pass pre-purchase inspection performed by a Porsche dealership.  It was already late Saturday so the inspection can only be done next Monday.  Cecilia and I had to keep it a secret for the rest of our weekend stay in Atlanta, but I was very hopeful that everything will work out OK.

The phone finally rang on Monday: She passed with flying color and was ready to be picked up!  I told my boss that I had to take the afternoon off to pick up my car in Atlanta, he asked me

At the same time Cecilia told my father-in-law to go with us to Atlanta to pick up the car.  He asked “why bought a car in Atlanta?” but she kept it a secret.  We arrived at the dealer and he found out it’s not just another car that I bought.

I am now a proud owner of a Silver 997!  The kids were very excited to meet her.  I also called my mom and dad in Montreal to break the news to them, and they were very happy for me also.

After all There is no substitute!