Toby and Kenny upgraded to Toyo RA1 tires after they trashed the set of Conti’s that came with the car.

RA1s were “DOT-R” tires, meaning they are road legal even though designed primarily for track use.  They had treads when new so they can be driven in the rain (on the street on on track) which makes them an especially convenient choice for a dual-use car.

The tires still performed at their best when the treads are shaved down (or worn down) to “slicks”.  Of course by then they would no longer be safe for street use so Toby bought a tire trailer to carry these “good stuff” to the track. 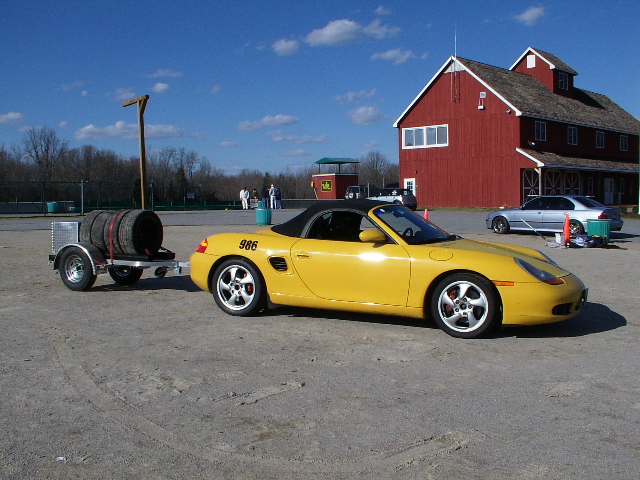 The tire trailer did not last long though.

Toby drove with the tire trailer up to Montreal to visit their parents, and for a 3-day track event on the Circuit Mont-Tremblant.  Mont-Tremblant is a beautiful track in a beautiful resort area and it hosted many Can-Am races as well as the 1968 and 1970 Formula 1 races.  It was also great that Mom, Dad, and Kenny’s best friend Alain got to see Dirty Molly in action.

On the final day, Toby and Kenny heard noises from the right rear during their first run.

Since there was still a long drive back to DC (with 2 people, luggage compartments filled to the brim and towing a tire trailer behind) they decided to skip the remaining sessions.

The noise progressively got worse after crossing the border.  It became a constant screech then thump, thump, thump near Albany (only halfway to DC).  It turned out to be a broken CV joint.  Dirty Molly was stuck on the side of the road and of course, it had to be during a downpour.

Toby and Kenny discussed how to get the car home.  Would our roadside assistance cover the 400 mile tow to DC?  Should we crash (no pun intended) at our friend Kyle’s parents’ and take it to the local Porsche dealer the next day?  Or maybe nearer NYC so we can take a train back?

Our worries were unwarranted.  The insurance company covered the $3000 tow bill to DC.  (We had to pay extra for the trailer though.)  We rode three-abreast in the cab of the tow truck.  Ten hours later, we dropped Dirty Molly off at the local Porsche dealer lot.

It was a really long night, but with another event coming up (and also needing a car to get to work…), Toby decided to get a used truck and trailer quickly.

As “fun to drive” was not an option Toby decided on a Toyota Tundra for reliability.  The local dealer had a good one in stock, but it was in their Annapolis, Maryland location.  A small deposit convinced the dealer to bring the truck to DC overnight.  A quick test drive the next day and Toby became an owner of a pick-up truck!

After some more research, Toby got a Dively Econo-Trailer.  It was spartan but was an economical (ha!) choice popular among racers.  The tire trailer was sold within minutes of listing to a local Porsche enthusiast.

They just slid further down the slippery slope without knowing it.  Dirty Molly no longer had to be “streetable” and this was the start of her transformation into a full-blow race car. 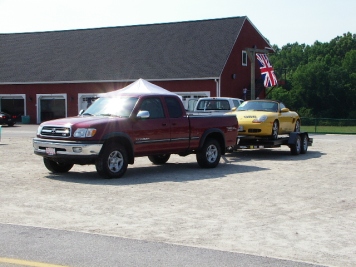