Jonathan and Toby ran a track event together at VIR in 2015.  They decided to do it again over Labor Day 2016. but with Kenny joining which made it a reunion for the three brothers (and Jacob) since Austin F1 in 2012.  They told mom and dad who were excited to join and a full family reunion was on!

VIR is unique among all US race tracks due to its “country club” setting, with lodging and restaurant on-site, making it more comfortable for everyone (especially the non-drivers.)

Mom and Dad flew into DC the week before, and Kenny and Cindy flew in on Thursday for the trailer tow down to VIR.  Mary and Oliver, and Jonathan and his family made their trips on Friday.

Lunch before the trip 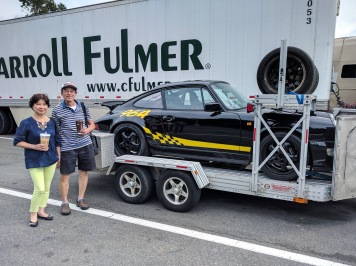 Coffee stop during 5-hour tow down to VIR

Disaster struck Friday afternoon.  During Kenny’s second run of the day (Tory’s fourth) the right rear tire exploded.  Kenny was on the back straight going well over 100mph and the flat tire put him in a spin and into the wall.  Fortunately and most importantly Kenny was not hurt.

“This will buff right out”

Team Shum was down to one car, but it did not dampen everyone’s enthusiasm and June reliably served triple duty for two days.  Jonathan continued to improve with more track time.  Toby enjoyed riding in his student’s Acura, BMW e46 and 996 Targa (yes three cars in three days) while Kenny enjoyed (and was a little frightened by) his student’s supercharged Corvette.

Jacob, Coco and Oliver had a great time hanging out at the track and with Grandma and Grandpa.

Oliver’s track within a track

After the event, Kenny, Cindy, Mom and Dad went back to DC with Toby.  On Labor Day they visited the US Capitol.  Mom and Dad stayed in DC for another week and Toby took them to Tysons Corner to try out the Tesla Model X (and HTC Vive).

Mom trying out the HTC Vive 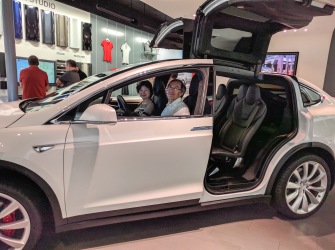