Baltimore is only a 45-minute drive from Washington DC so the Baltimore Grand Prix was basically a “local race” for Toby.

Toby was joined by his friends Chip, George and Geoff.  They sat at the exit of Turn 1, which witnessed plenty of action including contact between Scott Dixon and Will Power, and Sebastian Bourdais’ spin that caused a big logjam.

It was a good race to the finish but the race would be remembered for the number of yellow flags and crashed cars.  There was one final melee at the hairpin with ~10 laps to go, with Simon Pagenaud ultimately survived as the winner.

Unfortunately it was announced that the Baltimore Grand Prix will not return for at least 2014 and 2015.  Hopefully it will be back on again soon.

We crossed the track to the “infield” between free practice and qualifying.  Our ticket includes pit pass so we got to see “under the skin”.  Since it’s a street race, the Indycar garages were set up inside the convention center so it was nicely air-conditioned!

Very much like in Formula 1, the garage was actually serene while the mechanics focus on their work, with very little loud noise / screaming one typically imagine.

We also had a close-up look at the cars while they were towed back to the garage area.

The support races that weekend included Indy Lights, American LeMans, and Porsche Cup.  The American LeMans race was especially memorable, with a multi-car crash with cars jostling for position BEFORE the green flag. 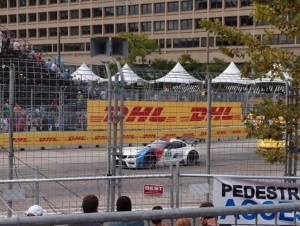