Toby was at VIR for my first race with the Porsche Club last weekend.

Special thanks to Kenny who built “Dirty Molly” from a street car to a race car; Geoff at ASG for prepping my car, which ran flawlessly; Bob Mulligan for being my rookie mentor; SkankyFrank for bringing my spare set of fresh BFGs; and the friendly and supportive fellow racers and stewards.

Thursday
Pick up car at ASG.  Customary delay getting down to VIR (always takes longer trailering!)  Toby barely made the Rookie Orientation Meeting, where they went through event logistics, passing rules, start procedure.  Lots to absorb in 1.5 hours.

Friday
Toby got up at 5am to avoid having to unload the car in 90+ heat.  Disaster!  The winch had a broken power cord, the new race numbers were too big for the windshield and the wrong color for the hood, and the window net was left in the LeMons car.  And Toby would regret not having time / energy to mount the in-car camera to capture to action…

Drove the car off the trailer in the dark, put on race numbers with ghetto racers tape, and headed over to tech.  Roll cage and kill switch checked out, but Dirty Molly was sent back for missing harness safety pin and window net.  A quick fix and a quick trip to the on-track “pro shop” and Dirty Molly was issued a PCA Race Car log book and was ready to go racing!

FP1 and FP2 went smoothly, but Toby was late to the grid for (critical as he found out later) FP3 and had to start from the back and struggled with traffic and only got a best lap of 2:16.5. Yikes.

FP4 was set up as 2 practice starts with a short dash to South Bend (Turn 9), then a 3rd practice start was followed by a 10 lap fun race.  Toby’s “green-ess” showed and the “XF” rookie lettering (might as well be a bulls eye) encouraged the experienced racers to put extra pressure on him, including getting squeezed side-by-side up the the Climbing Esses.  Toby made a mental note to be careful but tough.  He got more comfortable the last start, passed a few cars, and finished the practice race 7th overall.

It was a very hot weekend.  Thankfully he parked next to the Michelin/Jackson Motorsports truck.  They were nice enough to invite Toby to hang out in their air conditioned trailer!  Toby talked about his BF Goodrich tires and also told them Jon worked for Michelin in Canada. 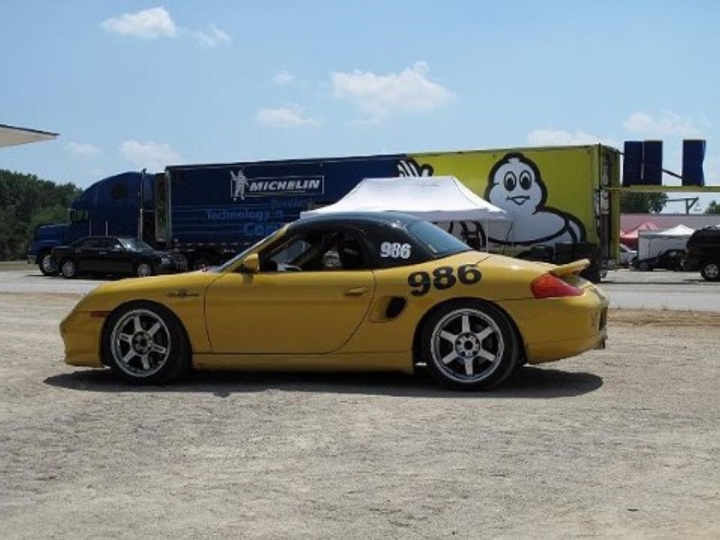 Saturday
Shocked to find out that Sprint Qualifying would grid by FP3 time (rather than by morning warmup).  Toby was stuck behind slower cars.  He did my best to create a gap, but still caught the car in front before start/finish on his first and only flying lap (on cold tires) for only a 2:14.0.  The pole time for F class was 2:12.3, just slightly faster than Toby’s PB though it would be a stretch given the horsepower lost to the hot weather.  Luckily many others racers had traffic issue also so Toby qualified P2 in class and P8 overall

Race 1: Poor start from (his dreaded) the outside line.  Lost 4 positions and ended up behind 2 cars that were just a little slower.  Toby was in a good 3 car battle through the race and made his first race pass when his target out-braked himself at the end of the back straight.

Next up was a G-Class 964.  They finally caught lapped traffic so the 964 lost momentum out of the critical Oak Tree turn.  With help from drafting (and the Aerokit wing) Toby got even with him and, along with the lapped car, ran 3-wide into the braking zone with Toby emerged in front!  Toby drove defensively for the final laps and saw his first checker flag!  Finished 9th overall (2nd in my class of 4), best lap 2:13.9. 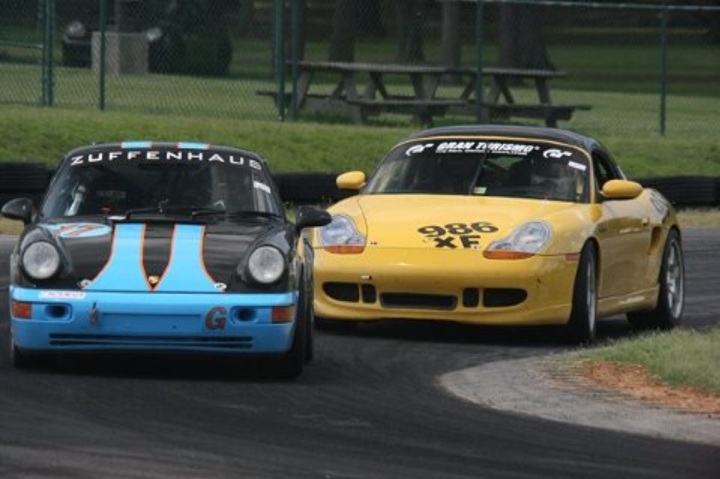 Race 2:  A better start from the inside line, still lost 2 position but managed to hold off two others.  Toby did well early on to claw back the lost positions but Dirty Molly started to become unstable under heavy braking and acceleration.  (It turned out the left rear tire had a slow puncture and was down 7psi at the end of the race.)

Two slower classed cars caught up.  Toby tried to run defensive lines for 4-5 laps until he overshot T4 and had to let one pass.  Then a close battle ensued with a SP2 944S2 for the remaindering of the race.  Toby drove a calculated race, making sure to cover the exit of the Climbing Esses and set up a good exit out of Oak Tree onto the long back straight.  The new Aerokit helped Dirty Molly’s straight line speed enough to keep the competition behind and Toby held on to 8th place (again 2nd in class) with a best lap of 2:14.1.

Bob told Toby the track announcer did a play-by-play of Toby’s close battle through whole race, and many racers came by to congratulate Toby on holding off the SP2 car.  Very cool.